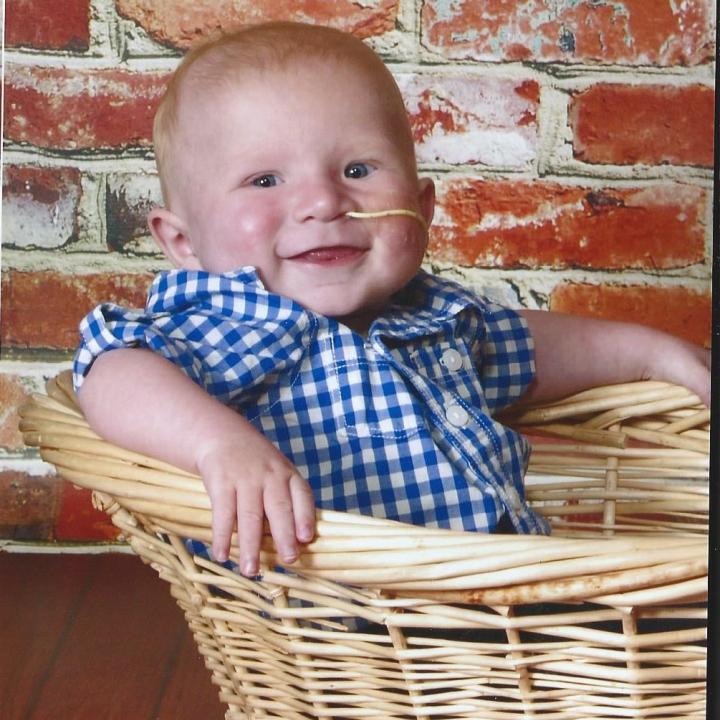 Early in my third trimester of my pregnancy, I was given unexpected and shocking news… our baby had a defective heart. And on top of that, the type and extent of the issue couldn’t be diagnosed until he was born.

A star is born

After weeks of pre-natal testing and much anxiety, Noah was born on November 16, 2013. He weighed a healthy 8 lbs 5 oz. But as soon as the joy of having my first-born set in, he was whisked away to the Neonatal Intensive Care Unit (NICU) at the Royal Alex Hospital. In the NICU, the cardiology team did an Echocardiogram and determined he needed to be at the NICU at the Stollery. This all happened less than 12 hours after he was born.

Shortly after his birth, doctors at the Stollery diagnosed Noah with a number of heart issues including Tetralogy of Fallot, Pulmonary Atresia, Ventricular Septal Defect, Multiple Aortopulmonary Collaterals and discontinuous pulmonary arteries...all of which I still don't understand! The bottom line is that his lungs don't receive blood properly and his blood oxygen level is at least 20% lower than average.

Doctors determined Noah’s left lung was receiving blood only through his Patent Duct Arteriosus (PDA), which typically closes at birth. For the first four days of his life, Noah was on medication to keep this duct open. But soon, this duct began to close. There was an immediate need to intervene.

At four days old, Dr. Jennifer Rutledge attempted to put a stent in Noah’s PDA to keep it open. Unfortunately, the surgery was extremely difficult and ultimately unsuccessful. (A tight turn in the artery prevented the stent from being inserted.) The alternative – to access the PDA through an incision in Noah's neck – was scheduled for just over a week later. But Noah had other plans.

The day before the planned surgery, Noah's oxygen levels dropped significantly. Doctors realized his PDA was closing more quickly than expected. An emergency surgery was performed to insert a stent. Thankfully, this was successful and the PDA has been supplying his left lung with blood ever since.

Noah spent two weeks in the NICU before being transferred to Unit 4C for a week. At three weeks, we were able to finally bring our son home... but we were only home for a week before he had to be admitted again.

This time, his weight had decreased significantly. We spent five more days in Unit 4C to increase his weight. While Noah received the best care there, we were thankful to be sent home again a few days before Christmas.

On January 30, Noah underwent his first heart surgery, with Dr. Ross. The surgery aimed to improve the amount of oxygen to his right lung – which had very little blood flow to it – by inserting a shunt to a small collateral artery (less than 2mm) and attaching it to his aorta. The surgery was a long shot. The collateral artery was so small, doctors were unsure if it would stay open. It didn't. It was very disappointing. No one knew what to do next.

A few days after the surgery, Noah had his fourth catherization to put another stent in one of the collateral arteries to continue supplying blood to his right lung. Again, we were in the hospital for two weeks in the Pediatric Intensive Care Unit (PICU) and Unit 4C.

After our release from the hospital, Dr. Rutledge sent Noah's information to Dr. Frank Hanley at Stanford Children's Hospital in California to seek advice on next steps. Dr. Hanley agreed to take on Noah's case and surgery was scheduled for June 18.

Noah's oxygen levels were a constant concern, getting as low as 65% before it was determined in mid-April that he needed to be on oxygen full-time. He was in and out of the hospital between February and June, with low oxygen levels and then a virus. We were greatly concerned that Noah wouldn't make it to his surgery in June. But he did!

On June 18, Dr. Hanley and his team performed the first part of a two-step repair of Noah’s heart. Dr. Hanley completed a ‘unifocalization’ procedure, which fused together his pulmonary artery and a few collateral arteries to make one big artery. They then attached it to his aorta. The surgery increased his oxygen levels significantly and his pulmonary artery has been growing! We spent 32 days in the hospital at Stanford. (This was longer than expected due to complications.) We have been home since July 17 and haven't needed one visit to the ER!

On November 5, Noah will undergo his third heart surgery in 11 and a half months. This surgery, at Stanford, will attach his pulmonary arteries to an artificial valve in his heart and hopefully repair the hole in his heart at the same time.

Despite these medical issues, family and friends tell me that Noah is the most ‘smiley’ baby they have ever met! His good nature radiates positivity and optimism. Those who don’t know about Noah’s troubles would never guess all he’s been through.

We continue to hope and pray for consistent progress… and thank all the doctors, nurses and other medical professionals at the Stollery and Stanford for all the support and their ability to work miracles.