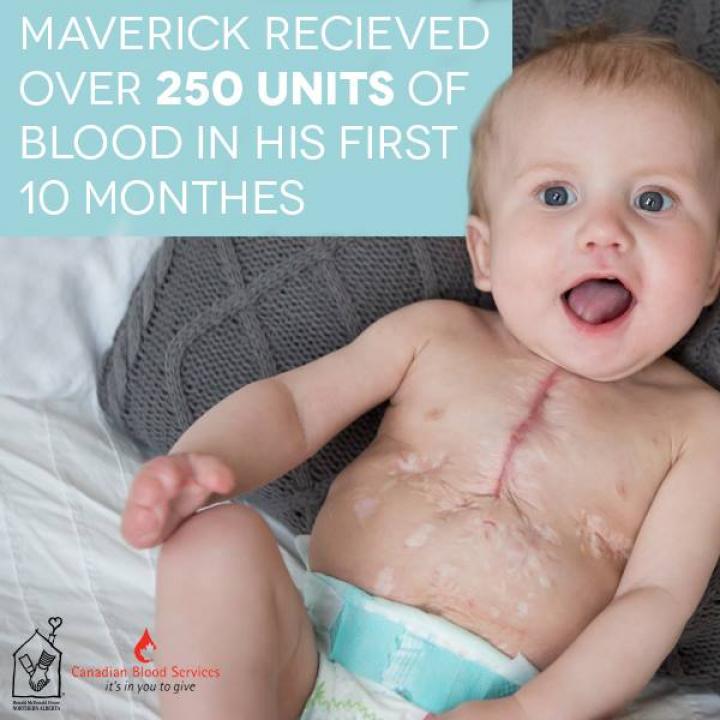 Maverick Vanderzwaag Born June 7th, 2013 Everything was perfect except my heart. I underwent open heart surgery on June 14th, 2013. The 9 complications with my heart were: double outlet right ventricle, narrowing of the aorta, coarctation of the Aorta, ASD, VSD, left, and right coronary complications.

The 9 hour surgery went well until the following day I went into cardiac arrest & my heart stopped for 43 minutes.

The amazing doctors at the Children’s Stollery hospital of Alberta got me back, and put me on life support. {ECMO}

From there Maverick continued to fight through a multitude of other battles. In under one year ~ heartbreaking to his family & all who love him ~ Maverick endured 27 surgeries, 4 sepsis blood infections, 3 cardiac arrests, 1 amputation, 4 strokes, 1 paralyzed vocal chord, crushed lung, & had massive organ failure, and so much more. Thankful to God, a multitude of prayers, and many others Maverick is here today & thriving with his two brothers & baby sister.

To give you a glimpse into Mavericks journey, his momma wrote this poem:

The surgery is long and risky. we prayed for a miracle. The infection is bad, he will not make it. we prayed for a miracle. He will not come off the VAD we prayed for a miracle. His kidneys will not recover we prayed for a miracle. There were a billion other times~ we prayed for a miracle. 'He surprised us all!' We said 'A whole army of hosts were praying for a miracle'. Here he is after, 26 surgeries, nearly 300 units of blood, 3 cardiac arrests 1 right atrium hemorrhage massive organ failure, crushed lung 4 sepsis infections amputation paralyzed vocal cord 1 heartbroken mommy ~ and a million other tests, scans, & things, our baby ~ our fighter, has surely shown them to be God's little miracle*. Mavericks family spent 10 months split apart while Maverick was fighting for his life at the Stollery Children’s Hospital in Edmonton. After 2 months of staying close to the ICU at a hotel across the road, David, & Rachel made there way to a long term residence the Ronald Mc Donald House of Northern Alberta where that was home away from home for 7 months. David would fly out from Manitoba on weekends whenever he could and the two boys Colten and Brody spent their year 1 hour away in Devon Alberta. Weekends that were spent together were found in the safehaven of RMH & the Stollery Children’s hospital those times that they could treasure & cherish family. The name Maverick means one who defies the odd’s. Doctors gave maverick a 5% chance of ever going home and over and over they thought they might lose him. Congenital Heart Disease is the Leading cause of infant death, and 1 in 100 children have it. The name Maverick gives hope to those who are fighting. Children are incredible. They bend & snap back. Never give up, keep loving & give the best life possible. Maverick is currently at home but it CHD is a never ending battle. Maverick is in heart failure but is currently doing the best he’s ever done in his 24 months. Mavericks next option is a heart transplant. Maverick & his family support The Madden Deluca Foundation & highly recommend those to never give up hope, live, love & dream.

Thank-you to the Madden Deluca Foundation for making a difference to those families who fight CHD every day. It is through Foundations like yours that make this trying time a little more manageable.

Keep it up Team Madden. Madden would be so proud. XOX sweet boys.