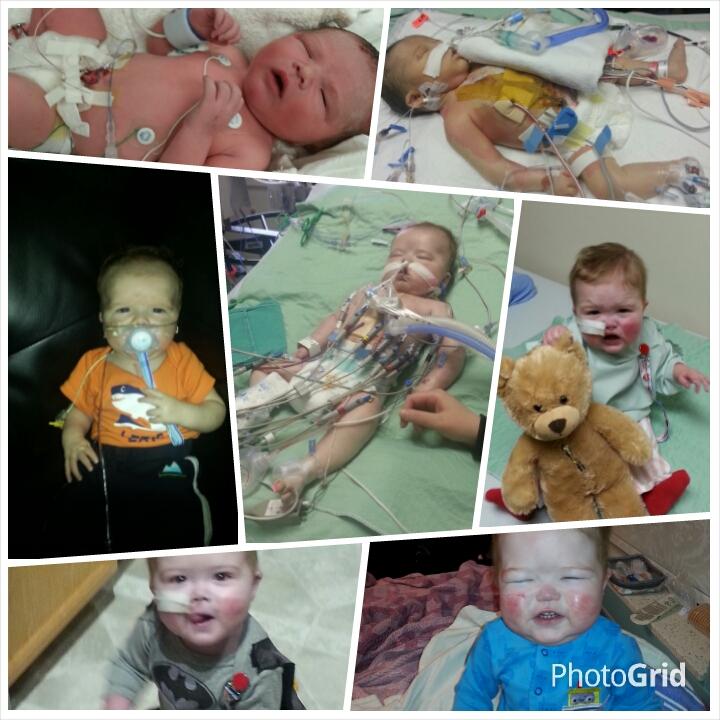 Here is the story of my CHD warrior Braeden.

At 19 weeks pregnant we found out that our son would be born with hypoplastic left heart syndrome (basically only half of his hearts works-the left side never developed).  We were terrified and heart broken about the struggles our sweet boy would face.  We learned that the survival rate was around 70% but it was difficult to feel hopeful when we had no idea what to expect.  Braeden arrived on January 2, 2014.  I was induced three days prior and we endured a long difficult labor.  He weighed in at 7lbs 13oz but was whisked away immediately to another room.  My husband went with him and took some pictures.  He was very purple and needed some help to start breathing.  They had trouble getting IV's in so they called the stollery and got permission to insert lines into his belly button to start him on a medication to save his life.  After two hours they had him ready to go in the ambulance to the stollery and the paramedics brought him in so I could hold his hand for a couple of minutes.  I didn't get to hold him until about 12 hours after he was born.

It was amazing to hold my sweet boy for the first time.  At three days old they decided he needed his first surgery because he was doing well but his oxygen saturations were higher than they wanted them and they said he would quickly start declining.  Doing the surgery when he was doing well would give him the best chance of survival.  We handed him over to the surgeons and he underwent his first open heart surgery called the norwood.  His chest was open when he came back from surgery but he was doing amazing.  Two days later his chest was closed.  They had a difficult time extubating him and had to be re-intubated twice.  Three nights in a row we received phone calls from the hospital because he was struggling.  We found out he had a paralyzed vocal cord and diaphragm as well as chylothorax (fatty fluid leaking into his chest).  He spend two months in hospital and when we finally got to take him home he was on oxygen and 24 hr NG feeds.  A couple months later when Braeden's home nurse was  checking on him his sats were starting to drop and turning up the oxygen did not help so we took him to the hospital.  At four months old he had his second surgery the glenn and it didn't go very well.  He had oxygen saturations in the 40'ss and we didn't know if he would make it through the night.  For 48 hrs the intensivists didn't leave his bedside.  The next day he went back to surgery to have his original shunt re-opened.  It helped a lot and slowly he started to improve.  He had another paralyzed diaphragm but this time he wasn't able to overcome it so he had surgery to fix it at 5 months old.  He recovered well and at 6 months old we got to take him back home with no oxygen.  He still had a feeding tube but we were slowly getting onto a better schedule that didn't require 24 hr feeds.

At 13 months he had a gtube placed and we are working hard on oral feeding although Braeden has no interest.  Braeden is 17 months old now and very happy.  He has gross motor delays but is slowly catching up and he will need a third surgery in about a year called the fontan.  He will likely need a transplant at some point but for now Braeden is doing amazing.