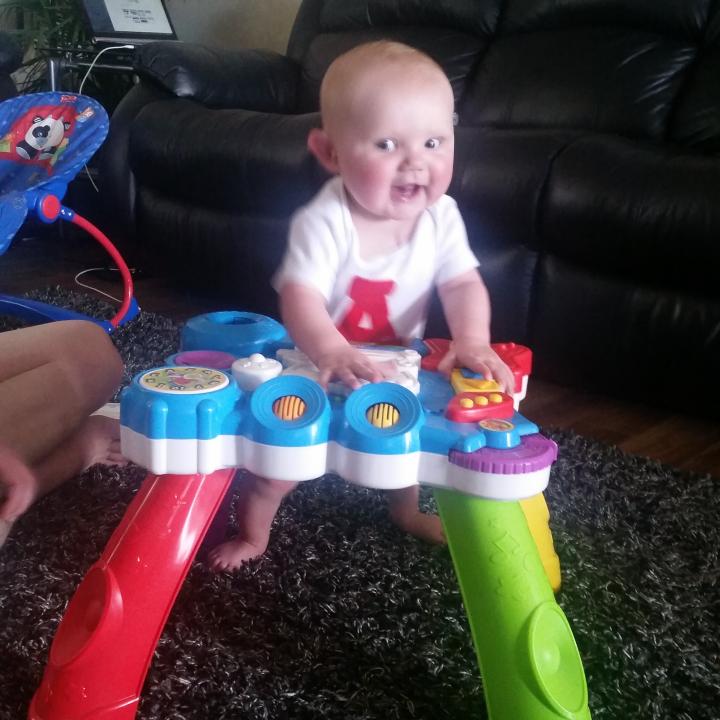 While I was pregnant with Asher I had all standard testing done, including 4 ultrasounds, and they all told me that Asher was a “normal and healthy” baby boy. We had no worries and were just so excited to see him!

On September 6, 2014 at 10:41 pm Asher made his entrance into the world! He came out screaming and pink, and looked perfect. He was 5 days earlier than his due date but weighed in at 7lb13oz! He had plenty of visitors come meet him on Sept 7 while in the postpartum area , and around supper time on Sept  7 they told us we could go home!! He went home with us and then we picked up his big sister, Kamara. We then spent the next day and a bit relaxing at home and trying to rest.  He was a good sleeper, and didn’t  eat all that well, but we hadn’t been too concerned about it yet since he was still only 2 days old. A nurse came to visit us at home as well, and he looked good!

On sept 8 (2 days old) it was bedtime and we were getting ready to go to sleep, that’s when Asher woke up. He woke up very unhappy and crying and crying. We thought he had gas since we heard his stomach making some funny noises, but that wasn’t it. We tried everything to settle him down, we were bouncing him, swinging him, swaddling, but nothing was making him happy! He had been crying for well over an hour, when I felt his forehead and noticed I felt very cold, I took his temp. And it read 94-95 (F) degrees. We then called the healthline, and they told us it would be best to bring him in. My dad came over to watch our daughter as we brought Asher in, it was around 1:30 in  he morning, we told my dad we should be back shortly. At this point Asher had stopped crying, but he was still awake. He had lost his strength from all his crying, and now he was whimpering, he had a constant whimper every few seconds and continued this all the way for the drive into the hospital, It helped us to know he was okay, he was bundled in plenty of blankets to keep him warm for the ride and luckily there was no traffic so we got there quick!

We got to the ER and registered, then Asher went to a small bed with a doctor and a nurse, they said his temp was 35 degrees (C) and blood pressure was 30/20. They turned on a warmer to warm him up. They then started calling ore people to come help, it was an emergency. They put a breathing tube in Asher, and gave him lots of fluids. They ran lots of tests, including Xrays and much more. I was overwhelmed with all of the people around, there was probably about 15 people working on Asher, and I couldn’t watch, but my husband liked to stay right by Asher.

Asher then got taken up to the Pediatric Intensive Care Unit after they finished in the ER. My Husband and I then waited another 2 hours before we heard anything more, we had no idea what was wrong, we still were thinking it was likely some infection. The doctor then came and got us around 6 am (Sept 9) and explained that Asher was born with a very serious heart defect called hypoplastic left heart syndrome (HLHS) and he would need a series of 3 open heart surgeries throughout the next few years, and the first needed to be done now. HLHS is considered one of the most complex congenital heart defects, as the left side of the heart is completely underdeveloped, leaving Asher with “half a heart”. Most babies are diagnosed in utero by ultrasound, so they can be treated and cared for right after birth, but luckily even though Asher went home he was still okay. He had presented to the ER in cardiogenic shock.  He was paralyzed and sedated when we saw him again. He was sprawled out under a warmer with a whole bunch of wires, lines, monitors, and drugs, and many people taking care of him in his room.

The next day, at 4 days on, on Sept 10 he was airlifted to the Stollery Children’s Hospital in Edmonton, Alberta, that is where he’d be getting his surgery done. We waited there for one week, he was still sedated, with a breathing  ube, so we couldn’t do much but sit with him and wait. After 7 days waiting,  Asher had his first open heart surgery, the Norwood procedure.  He was 11 days old and did great! The Norwood procedure is a very risky procedure, and the next few days would be very critical. He spent the next week recovering in Edmonton, he slowly got off oxygen and started getting tube fed milk, He had only been getting nutrients via an IV before that! On Sept 24, after 2 weeks in Edmonton, Asher got airlifted back to our home hospital. He spent another 3 weeks in recovery there before going home! On October 16 we brought him home again!! His big sister was so excited to have him back. This would still be a critical time between this surgery and my next open eart surgery between 4-6 months old, so we would be isolated at home during this time, he also was still being tube fed.

Asher then had his second open heart surgery, the Glenn procedure, at just over 6 months old on March 18, 2015 back in Edmonton. He was discharged 5 days after surgery, on March 23. He rocked that surgery as well! Since then Asher has been getting stronger every day, he finally got rid of his feeding tube at 8 months old, and was strong enough to drink and eat enough all on his own. His heart is working with only the right side, and will require a 3 rd  open heart surgery, called the Fontan procedure, between 2-4 years old. That will complete the 3 staged palliative surgeries on a heart with hypoplastic left heart syndrome. It is not repairable. However, Asher has developed like any other baby up to this point, and amazes us with his strength every day.