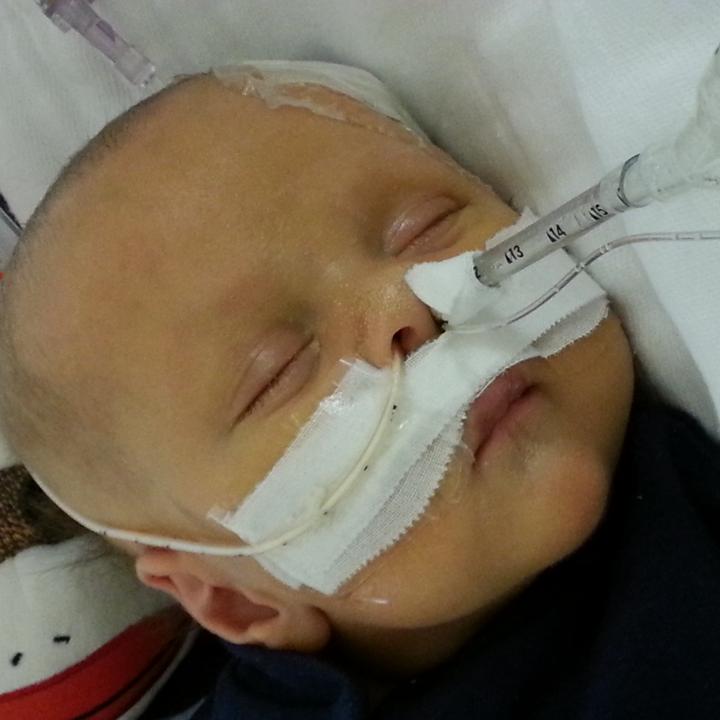 My husband and I along with our 4-year- old son Dawson were very excited to be adding another
baby boy to our family! Dawson was excited to become a big brother and we were looking
forward to completing our family. During my pregnancy, I was diagnosed with gestational
diabetes and had to be monitored a little more closely. On August 30, 2013 during a routine fetal
assessment when I was 32 weeks pregnant, doctors noticed that the baby’s heart was extremely
enlarged. We saw a pediatric cardiologist in early September and learned our son would be born
with a serious congenital heart defect. We were given the options of delivering in Edmonton and
awaiting a heart transplant, or staying in Winnipeg and choosing to take no action. We decided to
try to give our baby a fighting chance and went to Edmonton. The Variety Childrens Heart
Centre organized transportation for us out to Edmonton while Dawson stayed back with his
grandparents.
We arrived out in Edmonton on September 6 and I was admitted to hospital the next day for
monitoring. Following many scans and tests, doctors decided to try to perform a balloon dilation
on our baby boy's aortic valve after he was born in hopes of better sustaining his heart until a
transplant was found. The doctors were hoping to get me as close to term as possible but when
the baby's heart showed signs of distress, they decided to deliver him early at 35 1/2 weeks by c-
section. On September 17, 2013, our beautiful baby boy Brendan was born! He had to be
intubated within minutes of being delivered and was transferred to the Stollery Childrens
Hospital while I had to stay back and recover from my surgery. Brendan had a difficult time and
we were worried that we were going to lose him but be fought and made it through the first
night. I found the strength the next day to get into a cab and get to the hospital to see my baby
boy. The balloon dilation was performed that day, but it did not have the effect that the team had
hoped for. Brendan was placed on the waiting list for heart transplant a few days later.
Dawson came to Edmonton for Thanksgiving and to meet his baby brother. It was such a
wonderful reunion and even though Brendan was hooked up to all sorts of machines, Dawson
just saw his cute little brother and was eager to have him home!
At the beginning of November, Brendan started to show signs that his heart was getting weaker
but we tried to stay hopeful. He was on and off the transplant list for a couple weeks and the
outcome wasn't looking. In the end, his liver and kidneys shut down and we knew there was
nothing more we could do. We made a decision that no parent should ever have to make and
decided to take him off life support. Brendan passed away peacefully in our arms on November
26, 2013 at 10 weeks old.
It has been hard on all of us not having Brendan with us, but he gives us signs to let us know that
he's still with us! He will always have a place in our hearts!